At Shin Gi Tai Martial Arts Academy you will meet a variety of different people depending on which classes you choose and which days you train on, however all the team are committed to ensuring the best for your training and for your children’s safety happiness and improvement in their skills.

Without exception, all of our staff are annually DBS checked to an enhanced level, First Aid trained, properly insured and qualified as martial arts coaches or fitness coaches as appropriate. Being a high belt at a Martial Arts isn’t enough, all of our Martial Arts coaches have specific qualifications to safely teach Martial Arts that covers health and safety, how to coach adults and children, protection of children from abuse, lesson planning and risk management.

In addition our coaches regularly attend courses from external providers such as Sport England such ‘Safeguarding and Protecting Children,’ ‘Equity in your coaching,’ ‘Long Term Athlete Development,’ Coaching Judo to Athletes with Disabilities and Special Needs.’ Several of our coaches are also qualified to formally coach other coaches to improve their skills and knowledge.

Our coaches all have to regularly take part in advanced Martial Arts classes/courses at an advanced technical level to ensure that they are still enhancing and building upon their own skills.

Bryan and Lindsey married in 1997, and with a shared passion for the martial arts they own and run Shin Gi Tai Martial Arts Academy and have over 50 years of martial arts experience between them.

After spending years running a busy home life with 3 children, commuting to their jobs and teaching part time on evenings and weekends in various locations around Basingstoke, they finally decided to take the plunge and devote themselves wholeheartedly to securing their own premises and to run their school full time from one central location, so in December 2009 Shin Gi Tai martial arts academy opened its doors as a full time dedicated school.

The club is essentially a family friendly club with the central core being a couple who are dedicated to professionally teaching full time passing on their skills and knowledge to their students, and although the team has substantially grown over the last few years, it has grown with those same values in place, a strong family friendly team who all train with the academy as well as teach there, and because of this all the people you will meet here will understand you and your child’s possible nerves and will help them and you to feel just as at home here as they all do

In creating Shin Gi Tai Martial Arts Academy Bryan and Lindsey have created a club where they believe everyone from all corners of life of all ages, sizes and abilities will find themselves welcome, the clubs doors are always open to everybody because everyone deserves a chance to discover what they can become……. Bryan has been training in various martial arts for 30 years starting in 1982 and gaining his black belt in karate in 1987. As well as different styles of Karate he has also studied in the disciplines of Taekwondo, Boxing, Kickboxing, Ju Jitsu, Judo, MMA and Tai Chi. During his times training, he has always made a point of training with the best coaches that he could find.

He has taught students that have represented their country and won medals at a world level. He has also studied on a very technical level with the world Shotokan Karate Technical Director from Japan, an extremely high honour and something which provided him with a deeper understanding of his own skills through rigorous training he received.

During the late 1980’s and 90’s Bryan actively competed and achieved many medals at regional and national levels. In order to aid his competition career he qualified as a referee in 1990. He was then asked to become the SKKIF National Squad Coach to develop their competition skills. Although he retired from competing in 1996 he was enticed out of retirement in 2011 to compete with the Shin Gi Tai competition squad and has gone on to win several more medals as has the rest of the team including a silver medal at the UK Nationals. In 2013 he achieved a Bronze and Silver Medal at the World Karate Championships and a Gold Medal at the British Council for Chinese Martial Arts Annual Championships. In 2014 Bryan became the Karate England Veterans National Kata Champion. In 2015 Bryan won the European Veteran’s Shito Ryu Kata title, at the same event he won a Silver medal in the Veteran’s Kumite and also a team Silver medal. At the World Union of Karate-Do Federations World Championships in 2016 Bryan became the World Champion winning a Gold Medal in Kumite.

After a competition in 2012 Bryan was chosen to represent England as a member of the current National Karate England All styles national squad and trains and competes regularly with the English team. In 2014 Bryan was asked to become the Kata coach for the Karate England National Squad.

Bryan is also a Martial Arts Standards Agency approved coaching assessor, which is invaluable as an association when it comes to running coaching courses for the clubs members and ensuring the quality of the coaching.

Maybe because of Bryan’s eclectic background in martial arts, he believes in a pragmatic realistic approach to the martial arts ensuring that techniques can be personalised so that they work for you and the way you work.

His inspiration on a personal basis is the desire to continually improve his skills and knowledge. To make techniques smaller, more efficient and softer to perform whilst still delivering the required power. As a result he studies both mixed martial arts and Tai Chi which for some may present somewhat of a conundrum but as a holistic approach it works well for Bryan.

As a coach Bryan’s drive and inspiration is his students, from seeing children develop their skills and confidence which enables them not only to achieve their black belt but also helps them develop as well rounded people outside of the dojo and watching them pass their skills on. With the adults that he coaches it is the challenge he relishes in getting them to reach and exceed goals they have as a martial artist.

Outside of the Dojo Bryan relaxes with his family and loves to spend time in his garden or on the river with a spot of fishing. Alongside the martial arts experience Lindsey has also undergone formal teacher training aimed at all ages and is a qualified college lecturer, giving her a professional insight into the teaching in the club. Lindsey is responsible for much of the way in which the classes are taught so that they are not only fit for the purpose but also so that each student will get the most they can out of each class on a physical, emotional and social level and in particular that the children’s classes mirror that of some of their educational key stages. Lindsey was also instrumental in designing and running our highly successful Ladies only Self Defence course.Lindsey is also a driving force behind the clubs continuing education of children in other aspects such as the successful ‘Don’t Bully Me!’ courses.

Lindsey has competed herself over the years in various regional, national and international competitions and after a competition in 2012 was chosen to represent the English Karate as a member of the current National England Karate Squad which sees her train and compete for her country with a specialist focus on Kata and also coaches and competes with the Shin Gi Tai competition squad. As part of the National squad she has won numerous Gold Medals and became the World Kata champion in 2013, 2014 and in 2016. She is a English, British, European and World Karate Champion. Mandi is our Club  Business Manager. She is responsible for the Business Operations and Communications of the club. She also helps us to successfully deliver the different programs that we run and for liaising with key partners, local schools and government agencies and our members. She ensures that the management and administration of the club policies and procedures are regularly reviewed to ensure quality assurance.

You will find Mandi training in the family classes with her son and also in the adult Martial Arts classes. Mandi Became The World Karate Champion in 2016 for Kata. 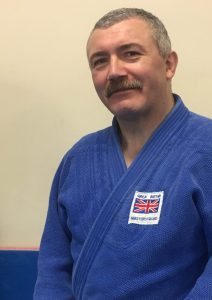 Derek is a 6th Dan with the British Judo Association and a Level 3 Coach, he is our Head Judo coach. He been practicing Judo now for nearly 50 years and over the years has gained many competition successes. Nick is a Level 1 Judo Coach with The British Judo Association. He is currently working hard to progress to his 1st Dan in Judo. Nick can regularly be seen on the mats with his children who are also train in Judo with him at our Basingstoke Judo Club.

Christian is a BJA Level 1 coach and has been practicing Judo since Childhood. Christian is a regular on the competition mats winning numerous medals and titles over the years. He is currently adding points towards his 2nd Dan in Judo

Jonathan is a 2nd Dan black belt with over 20 years experience in martial arts and has trained with Bryan since he was 12, when he joined his sister Lindsey Swift (Now Andrews) in her training.

Jonathan has spent several years living overseas where he developed his skills in Karate, Muay Thai and Aikido whilst training with international senior instructors, and training with the UAE national squad in the Middle East. He has also represented his country as part of the Junior UK Team.

Following this Jonathon returned to England to attend university and subsequently joined the Police Force. Since joining the force he has received training in many specialised fields including Riot tactics, Tactical communications, pressure point training, violent prisoner restraint and other control techniques.

At Shin Gi Tai he is known for his in depth knowledge of the applications of karate and his approach to flexibility and fitness in class.

Jonathan trains to keep both his mind and body fit and alert and strives to continually improve his skills, and finds
that it can be a successful release from the day to day stresses and strains placed on us all from families and careers.
His favourite aspect of training is the complete immersion into developing someone’s ability and watching that ‘Eureka’ moment when a technique has been grasped that can change the way someone thinks and works.